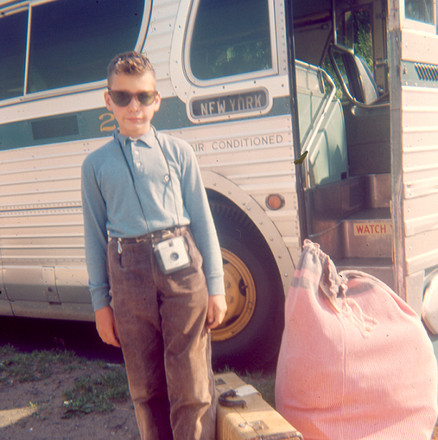 I could probably say that photography is part of my genetic makeup.
My uncle loaded, developed and showed the film of the first nuke tests in the desert southwest and my great grandmother gave me her fold out bellows roll film camera that still had film in it. In the late 70's I finally got brave enough and experienced enough to develop the 620 film.
It yielded 2 images of the aftermath of a blizzard in Hackettstown, NJ including one with what looks like a '53 Chevy.
My early attempts at photography began with a Kodak Brownie, whose subjects included the 1964 Worlds Fair,
a dot sized Oriole in a tree while on the 6th grade camping trip, a family campsite in Cape Hatteras at sunrise, and a thunderstorm in progress while a camper at a summer camp.

I eventually graduated to an East German Werra that used a wide spring loaded geared ring around the lens
to cock the shutter (which later self destructed) and then it was a Voigtlander which used a version of Agfa Rapid 35mm film proprietary to that particular camera. Bought them both in NYC and I remember one store owner being real annoyed at me because I wouldn't buy a case with the Voightlander.
So he put it in a small brown paper bag.

I've become real good at improvising and being a master at work-arounds.
My first tripod was made from a music stand.
And I created small "cradles" made of wood that the camera would fit into and onto the music stand.
Later versions would be used to photograph solar eclipses & space shuttle launches holding 2 cameras with up to a 1000mm lens.

Sometime around my 2nd year of high school my friend showed me a recently acquired Exacta SLR. As I looked through the view finder, the neurons really connected as I realized I was actually looking through the lens !
The camera and I were now as one but it wouldn't be until 1972 when I would save up enough money, 225 $ to buy my first SLR, a Minolta SRT-101 with a 50mm f1.4 lens.
I was now at the point of no return.

I started doing wedding photography in the late 70's when you were given 10 rolls of 120 film (that funny smelling stuff) and expected to bring back at least 100 useable images.
Trained on a Yashica Mat 124 G then moved up to a couple Mamiya C330f's.
Kept a normal lens on one & a wide angle on the other.
Even owned a motorized Hasselblad that was way too noisy.
At the same time I was also freelancing for the Bergen Record for spot news.
It actually got to the point where if I got something I thought they'd like, I'd just show up with it and most of the time they used it.
My best image at that time was of the 1977 NYC Blackout, complete with lightning strikes in the darkened cityscape background.

I learned how to develop & print b&w studying the writings of Ansel Adams and Fred Picker.
Favorite quote from Ansel Adams...... " The print is the performance, the negative the score".
Even today in the digital world of post processing it's still true.
Making Cibachrome color prints from slides was also another fun endeavor.
Nasty smelling chemicals that had a shelf life of less than a week.

My 35mm system at the time consisted of Minoltas with lenses that ranged from a 16mm full frame fisheye to the 100-500 f8 zoom. In the mid 1980's I discovered Nikon.
Bought an FM and the 35-105 lens and immediately saw the difference.
I was now a Nikon owner and sold off much of the Minolta equipment.
My Nikon system reigned for almost 14 years including a trip to Italy where I photographed the ceiling of the Sistine Chapel, and also the events of 9/11 on location where I used my ham radio skills providing radio communications for the Red Cross.

About this time the dawn of the digital camera revolution began and I picked up my Sony 3mp digital camera. Actually got pretty good with it. Shortly after that I found that most of the photographers I was now associating with in 2004 owned Canon because at that time Canon was producing better skin tones than Nikon for wedding photography. It was now time for the big step to a Canon 20D with the 17-85mm lens.
During this time I restarted doing wedding photography which led me to assisting another photographer with 13 weddings in 5 months as she struggled with terminal cancer.
6 weeks after our last wedding shoot with our 1 one only "Bridezilla" she became a memory.

I have kept a few Nikon lenses like the 15mm f3.5, 1000 f11, 24-50 and 35-105 which I can adapt to my aps-c & full frame Canon bodies. Should have kept the 50 f1.2 but I just love my 1K as I call it and have used it for many of my NYC sunrise images. My other "big lens" is a 1250mm f10 Celestron, the terrestrial version of the C4 which I've used to capture the International Space Station flitting in front of the moon or with the proper solar filter, in front of the sun. I use a Swiss program that calculates the location & time of the transit which usually lasts about 6 tenths of a second.

During the mid 90's I discovered I had a knack for photographing pets.
Started with a couple "Your Pet & Santa' sessions at a pet supply house and really enjoyed the results.
Even made some $$ on the effort. Now with digital and accurate autofocus it has become even more fun & productive. My arena has expanded to animal shelters, dog walking groups, and a yearly get together of Golden Retriever rescue groups known as Goldstock. I am also the "staff furtographer" with Golden Retriever Rescue of NJ and of the "Ryders Alley Trencherfed Society". Look up R.A.T.S. on Facebook.
You'll see what I mean and how we let our dogs do what they're genetically hard wired to do.

Although the primary albums will be of pet "furtography" there will be other albums of my work created as time permits.

So, I hope you have enjoyed this little dissertation and enjoy the current and future albums that will be created for your visual & emotional enjoyment.
Oh and the lead image is, you guessed it, noseprints on the front window from my 2 canines Cesar-"Paco" Pilatus
and Gold-Rush "Piper" 3 Echo 4 1. (There's a hidden aviation theme there)

NosePrint Pet Furtography.
All I need is a 125th of a second.
Question is.
Which one?
WLReyna Jr
Powered by ZENFOLIO User Agreement
Cancel
Continue